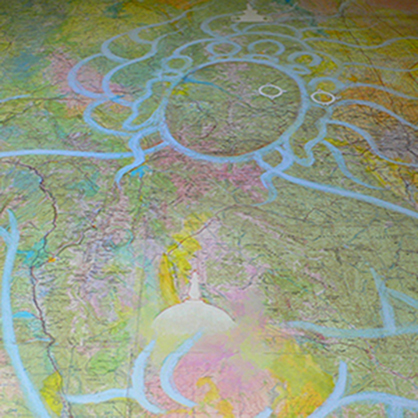 “Show this [map] to many, many people. Then they will be inspired to go on pilgrimage, make offerings, and initiate auspicious connections for lifetimes.”
Khenpo Tsultrim Gyamtso Rinpoche

During sixteen special years of painting murals in three major public stupas along the Rocky Mountains (those large enough to contain interior rooms),-The Bodhi Stupa in Sante Fe, New Mexico; The Kagyu Mila Guru Stupa north of Questa, New Mexico; and the Great Stupa of Dharmakaya at Shambhala Mountain Center, Red Feather Lakes, Colorado- I regularly traveled between Boulder, Colorado and northern New Mexico. My primary home and studio was in Boulder, and I was given a large adobe studio in the Sangre de Cristo Mountains of New Mexico. Set in the midst of private and beautiful land, it was covered in pinon, ponderosa, aspen, sage, and chamisa, with a perennial clear-running and sparkling acequia madre. Its gentle water-meandering song comes back to me as I write. This was my wilderness place for art-making, writing and retreat. It was located just across the Colorado border, south of The Great Sand Dunes and Mount Blanca, the fifth of Colorado’s “Fourteeners” at 14,357 ft. (4376 m).

I came to relish this journey, crossing from the eastern flank of the mountains at Kenosha Pass and the Dakini’s throat center, to the western flank of the Rockies, driving through three valleys and over three mountain passes. The wide expanses, dynamic skies and changeable weather, the dark evergreen forests contrasted with mountain peaks (some never shedding their snow caps) and the wide open alpine valleys hosting antelope, buffalo and wild horses -all this abundance allured and delighted me. The six-hour passage one-way, spoke strongly of sacred world and I felt a deep sense of cosmic order and profound beauty with every journey.

One day in my adobe studio I realized that this drive was definitely a sacred corridor  that might show signs of alignment with the tigse or proper proportions of a buddha. The route’s length and subtle curves reminded me of the dakini sky-dancer, so I began to experiment. I purchased detailed sections of topographical maps, arranging them in a long vertical column on the 18’ high studio walls. I set up scaffolding between two ladders and started drawing. I made many, many sketches of the dakini on long rolls of tracing paper, hanging them over the 15’x7’ map, adjusting her size while always staying true to the proportions of a buddha figure. Until one afternoon I discovered it -the correct size of the dakini. The stupas and spiritual centers aligned to the chakras of her form -centered tips of her hair, crown, forehead, throat, heart, naval & secret centers, soles of her feet, center of her sun disc, and center of her lotus throne. The Dakini Map was born. It verified my initial perceptions. I was stunned at the pure, undeniable, and conclusive alignment that was revealed.

acrylic and chalk
on paper